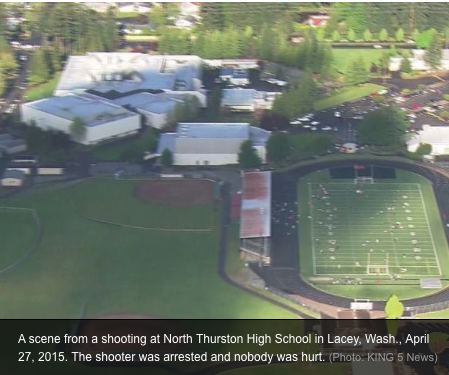 … I would have been infuriated.

As I was driving this morning, I heard on the radio that yet another school had a shooting incident, this one in Lacey, Washington, the area where I work! Today a boy went into school with a gun, running throughout the hallway yelling “I have a gun”. Kids were running and hiding, clearly scared to death because they have seen this on the news way too many times. A few shots were fired and thankfully, no one was hurt. A history teacher, Brady Olsen tackled the shooter, stopping the madness before anything else could happen. Parents are hailing Olsen as a hero, as he should be. He clearly risked his own life but he did what came naturally to him.

Meanwhile I was on the air doing my radio show right there in Olympia. Did I say a word about what was happening right there in our city, nope! I was being my usual Susie Sunshine self with a huge smile in my voice. I was meeting someone this morning to help me with my website. The radio station I work at doesn’t have live jocks, we always voice track our shows. My show for today was done yesterday, Sunday afternoon.

No where in my show do I speak in horror of what happened at the high school. Everyone that listens to me knows how passionate I am about my child. If I were at the station this morning, most of my show would have been dedicated to this event. I would have been opening up the phones to local people that were affected by this and let them vent.

I was working in Seattle on September 11th. We completely stopped all music and removed all advertising that moment and kept it that way the entire week. We opened up our lines to the people that felt the need to connect. To me, that has always been what radio was about. For five solid days we did nothing but take call after call from people that had lost someone or just had something they needed to say. By our station not opening up our hearts and phone lines to the community, I am saddened as I believe it is our obligation. That has always been what radio is about. Connecting people that need to connect.

Thank God no one was actually shot and the teacher that tackled the kid was not harmed. This continues to happen in our society and I know my own child who is headed to high school in just a few months, is scared to death.

We can never know who is going to be that one kid that cracks and just can’t take it anymore. Sending your child to school feels almost like sending your child off on an airplane by themselves; hoping they get to their destination safe and sound.

As a parent, I would have hated to hear my happy voice this morning. I would have definitely switched channels.