How can anyone hurt an animal? 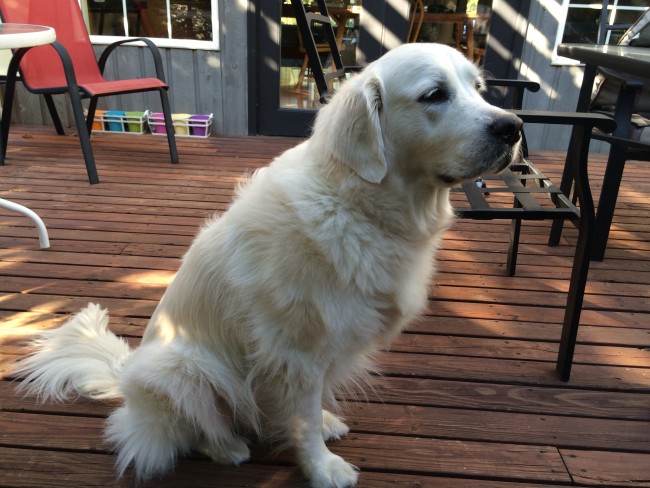 I will never understand how anyone can be cruel to a child or an animal. Completely blows my mind anytime I hear about it, I have to witness it or the possibility of it.

Twice recently I’ve been walking around my neighborhood with my dog and this sweet boxer/lab mix has joined us on our walk. She doesn’t have a collar and is incredibly sweet!

About a week ago we were walking when I saw it running all over the roads of our neighborhood. I called to it, and it came running to me. As we walked along the street, I finally ran into someone who knew the dog. He confirmed it just lived up the road and that he would get her home. He held on to her while Marleigh and I walked away so she wouldn’t follow us.

Today, the same thing happened. This time when she saw us she came running as she knew from before, we were safe. She showered Marleigh with kisses and welcomed affection from me; this dog is so sweet and loving! We walked once again down the road hoping to run into someone who could identify her. I knocked on doors of a few houses, but even with multiple cars in the driveways, no one answered.

When a dog comes to me, I cannot disregard it. I would be devastated if I learned anything happened to it because of my negligence. I don’t care if I am in a hurry or have something I must do; dogs are living things! I can’t just walk away. It’s not in my nature.

To try and figure out where the dog came from, I dropped my dog at a friend’s house nearby. I hooked the leash around the dog’s neck while I was out to discover which home this dog lives in! 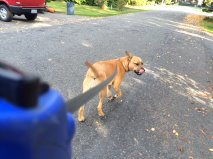 He name is Leah

Back on the street where the I found the dog, it walked up to a nasty puddle of who knows what on the street and started drinking feverishly. At that point I realized it had been out of the yard for a long time, and now I wanted to get it to water as soon as possible.

Off to my house we went. As I headed to my house, I called a neighbor who has done a lot of dog rescue in her day. She came out and said yes, she had seen the dog before.

About a year ago, she had the same dog at her house as it was running wild once again. At that time she was wearing a collar so my neighbor called the number on it.  When the woman showed up, she made it quite clear that the dog belonged to her son who was in rehab. She could care less if anything happened to the dog; she was bothered that she even had to come to get it. With this information, I was leery of taking it back to where it lived. If this animal isn’t wanted, no way do I want to take it back to a living hell. 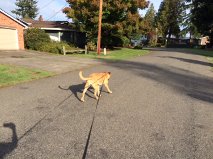 At this point, my husband showed up. He is familiar with the man who lives next door to where we think the dog lives, so together we went to see if that neighbor could help. Before we checked in with him, we knocked on the door of the house we thought to be home for the dog. After no one opened the door, we started walking back up the street. At that time, a young man was walking down the road toward us. He yelled, “Leah!” I asked if it was his dog, he told us it belonged to his girlfriend. The door to the house now opened where we knocked moments before.

An older man came out, and the look on his face was the last thing I wanted to see. He was pissed. As he walked to where we held the dog, it was quite evident he was drunk. He rambled on about how Leah gets out from the house behind his (they are connecting backyards – apparently family). When the dog escapes, the collar gets hung on the fence.

All I knew was this man was pissed, he was drunk, and the dog was terrified. I’ve lived this before. I knew as did Leah that once they walked through the door, and it closed behind them, Leah would be beaten. This dog was cowering and was clearly scared to death.

I know there was not anything I could do at this point. What I do know and what I promise is, if and when this dog gets out again, it will not go home. It’s a hard enough pill for me to swallow knowing I had to let him take her back inside.

What kind of world is this where we live? How can anyone ever cause harm to a child or an animal? I was a victim, and so were some of our animals. Anytime I can help someone who is unable to speak for themselves, you can bet I will be their advocate. I just hope this sweet dog has another chance to get out. I’m just sickened by the thought of poor Leah walking in that house.

How can anyone hurt an animal?