It Is Only a Game 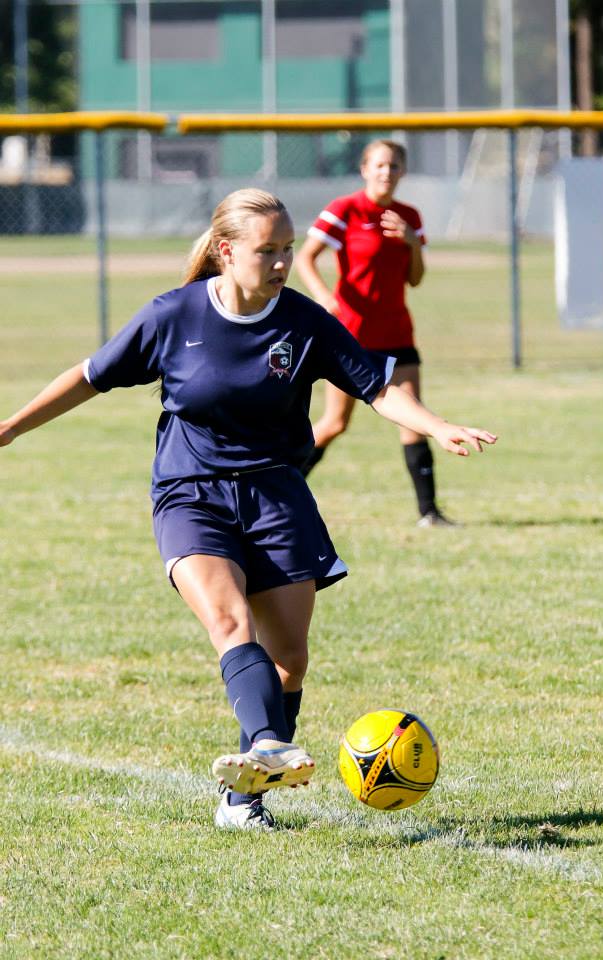 It was just another Sunday soccer game for Hannah. It would be the first game of the season for the new team she has been playing on for about six months now. I hated that I couldn’t come to this one but since starting back at my former radio station, I was scheduled to work smack in the middle of the day. Hannah knows I don’t miss her games unless I have to.

After the game, she called to tell me about it. Nothing about the game went well. They started out with one goal against them after the first half. The second half they had four more goals scored against them. She told me they felt defeated, and it showed in their playing. She also mentioned that she had a little headache.

As my usual follow-up to her saying that her head hurt, I asked if she had been drinking plenty of water to which she replied (as she always does), “yes, I drank two bottles!” She then told me it started hurting right after she did a header from a throw-in.

I play soccer every Monday night and although I have no idea what I am doing, I have at times done headers. They usually don’t feel good because I know I’m doing them wrong. Hannah has had training on how to do a “correct” header… if there really ever was such a thing.

When I got home from work, and she told me more about the game and her head hurting, I asked her dad to take her to one of the local urgent care clinics. To me it was simple math, she headed a ball, and now she had a headache. It was a Sunday, and she would be back to school the next day, better to be safe than sorry.

When they returned from the clinic, the doctor wrote a note for Hannah to take to school the following day, just in case the headache continued. The note said: “Hannah was seen in the office today for a head injury. Please allow her extra time for homework and in class assignments as she continues to heal. She has not been diagnosed with a concussion at this point in time.”

It was a long, hard night for Hannah trying to sleep. She got up in the morning, barely, and I drove her to school. These texts started between us shortly after school started.

Hannah: My head doesn’t exactly hurt but it feels like there is a little pressure in my head and the lights at school are so freaking bright.

Dad: Okay, try to focus on school stuff and see how things are throughout the day and tonight. It will get better soon. Love you.

Hannah: Okay. I love you too. Also dad, last night I was exhausted but could not fall asleep. Sleep was impossible it felt like.

Mom: Do you need me to bring you sunglasses?

Hannah: No it’s okay. I think. (She attached this picture) 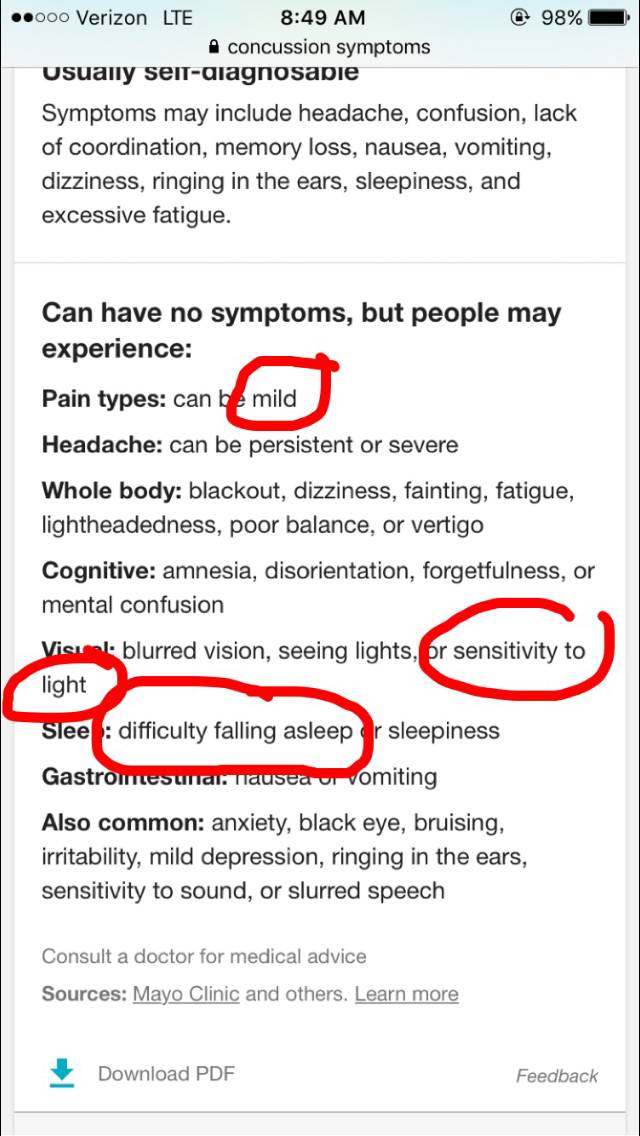 Mom: Looks like you are right on the edge kiddo! You were so exhausted too!! You are going to bed early tonight! You can miss soccer and invest in sleep.

Hannah: I just couldn’t physically fall asleep last night. My head does hurt a bit. Pressure in my head.

Dad: Okay but try to stop thinking about it. There’s nothing to do but rest make sure you don’t hit your head. No practice tonight and we’ll see how things progress. What about PE? Your note should excuse you from that.

Hannah: Okay. I still am going to go to practice right? Just not do anything. I won’t go the whole time. My note excuses me from school work.

Mom: NO! You need to get to bed early since last night was a failure.

Hannah: My head is hurting more now and I’m trying to ignore it. The more I think, the more my head hurts. Should I go back to the doctor?

Mom: Picking you up at 11:30 to go to ATI (Physical therapy clinic that performs concussion screenings for the school district).

When we met with the therapist, she pulled up Hannah’s baseline screening from August of last year for comparison. Hannah has never had a concussion. She then gave Hannah five words and had Hannah repeat these five words to her three times. After that, they did a variety of balancing exercises with her eyes closed, walking a straight line, and the therapist had Hannah repeat number sequences to her, reversing the order. When all of the tests were complete, she asked Hannah to repeat the five words she gave her at the very beginning of the visit. Hannah paused and then remembered only two of the five words. She couldn’t remember the rest. At that moment, Hannah did offer the five words given her in August, she remembered those. She could recall the stuff from five months ago but not from five minutes ago.

Hannah definitely has a concussion. The therapist explained that she needed rest and basically time to heal. She filled out an “Injury Return to Play Form” stating that her participation is on hold with no activity allowed.

We talked about Hannah’s school work and what she should do about it. The therapist recommended that Hannah sit down with her math homework and just see if she is able to do it. She wanted her to at least try, mostly to see if any of it makes sense. She told us that early on with a concussion; there is a chance that none of it will make sense. For today, Hannah just needs to try so we can get an idea where she is.

When we returned home, Hannah did just that. She opened up her math book and took out the assignment she didn’t finish over the weekend. As I looked around the corner from the kitchen, I could see the sadness in her face. I walked up to her and looked in her eyes when she started to tear up. She told me that nothing on the page made sense. She had no idea how to do any of these math problems! She had been doing these for weeks now with no problems, pulling a solid “A” in the class. Seeing the devastation on her face broke my heart. Knowing how scared she was and there was nothing I could do about it ultimately was killing me inside.

Because I wanted to give her as much comfort as possible, I slept with her and let her just be my little girl. Sometimes, a child just needs their mommy and right now, she knew I was all hers. If just snuggling with her gave her some sense of relief, it was the least I could do.

When she finally woke up this morning around ten, I asked if she thought she might want to go to school. I’m so glad she decided to go. We both learned today that her high school just happens to have one hell of an amazing nurse. We learned more in the half-hour with her than I’ve ever known about concussions.

The nurse pulled up Hannah’s schedule that revealed how rigorous of a class load she carries. With her already high GPA and the semester coming to an end, if her counselor agrees, they can “freeze” her grades where they are right now. With this, if she is unable to get any work done or take any tests before semester end, her grades will remain where they are right now. If they don’t freeze them and she is unable to get any work turned in, her grades will plummet by report card time.

We walked away understanding that Hannah needs not to use her brain for about two weeks and then with the rest, she will heal. She used breaking an arm as an example. When you have a broken arm, it needs to be immobilized so it will heal. The same goes for your brain. You have to just not use it, which with the brain, that is extremely hard to do.

She told Hannah that to rest her brain; this means no cell phone! It can be used as a telephone only! No electronics of any kind including television, computers, puzzles, video games, snapchat, Instagram, Facebook, etc. She shouldn’t read or try to figure anything out. That hardest part about resting your brain with a concussion is you need to sleep, yet one of the symptoms of a concussion is the inability to sleep! It’s a vicious cycle.

The other thing she talked about is how many kids tend to get depressed because they are so limited in what they can do while healing. She told Hannah if she is up to coming to school during this time, she highly recommends it. She can literally sit in a class and stare at the walls because at least in school, she is with friends and people. The nurse suggested she come to her first three periods one day then the next three periods the next. Any sort of schedule would be better than just staying at home staring at the walls.

Picking Hannah up after school today, she was clearly nervous about falling behind in math. The nurse did say that math is the total litmus test for a brain injury. When you can’t connect the various dots to figure out complex math problems that you once knew how to do, your brain is not functioning right. When it starts coming back to you, and you understand it, you are healing the way you are supposed to. I had to reassure Hannah that we will get any help necessary to get her back up to speed.

Fortunately for Hannah, Friday is a half day and Monday is a holiday, so she has extra non-school time to recover. We will do anything we can to keep her happy and keep her brain in healing mode. One day we will look back on these weeks and be able to laugh about it. Until then, we just need to get our girl back in shape.

All if this started with a simple header from a throw in of a soccer ball, something Hannah has been doing for many years. As minor as it was to the major forgetfulness she is experiencing, we have all learned a critical lesson. Hannah isn’t looking down the road toward a soccer scholarship. She plays soccer because she loves it, it keeps her in shape, and she gets to enjoy other athletes. The days of using her head to move the soccer ball are over. It’s just a game. Nothing is more important than her life.

One of the things that I just can’t wrap my head around is why you would ever have more than one concussion! Once your child has one, and you see how precious their little brain is, how could you ever let your child put themselves at risk again? Hannah realized this on her own with this injury. It is never worth it to risk her brain ever again. It’s just a ball.

It reminds me of someone choosing to start smoking cigarettes and then saying later when they are addicted, “Oh, I didn’t know it was bad for me.” Let’s get real.

I know concussions are being taken very seriously in the world of sports right now, many changes will be made down the road. In the meantime, be your own advocate and please, make smart choices when it comes to how you play a game. Remember the key word here folks… it is only a game! 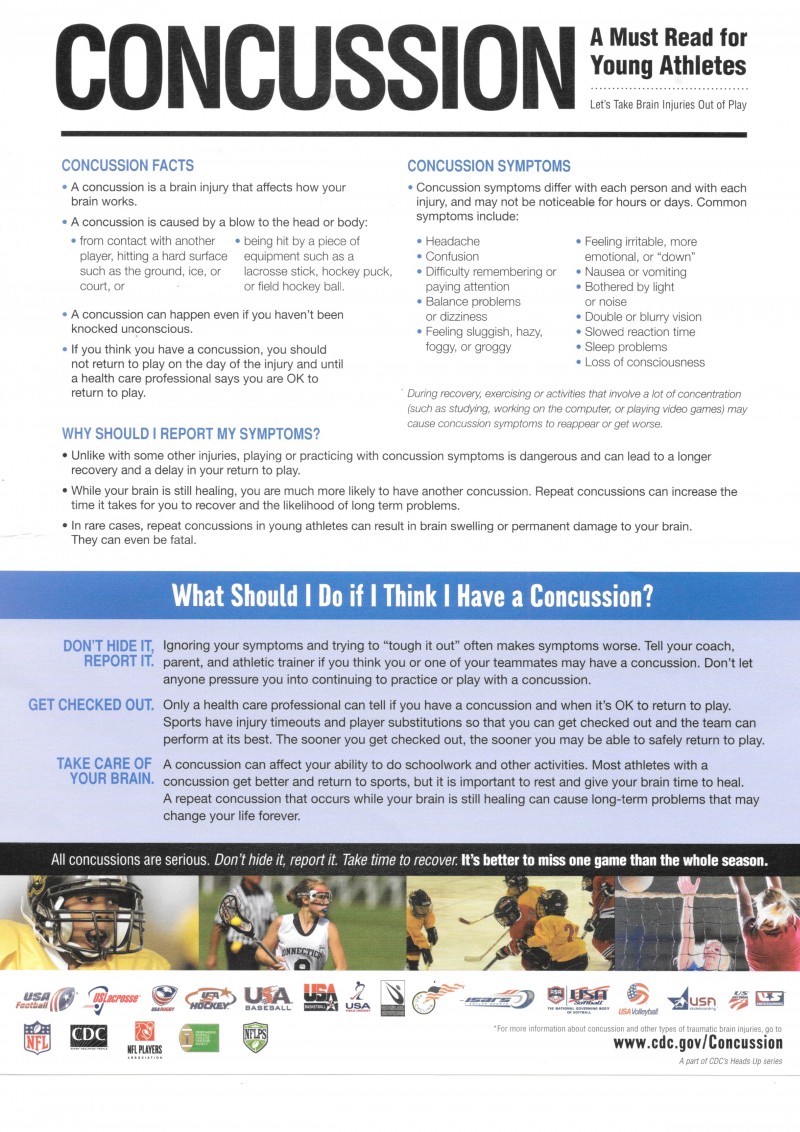