Suicide Does Not Have to be an Option 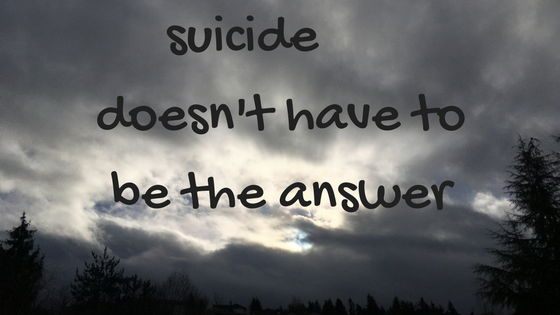 Suicide doesn’t have to be an option.

Why do you think kids end up going this route? I am stating right out of the gate that I am not an expert, but when I was younger, three times I thought ending my life was the only answer. I was so close to ending it all because the pain wasn’t worth the cost. The only reason I didn’t follow through was that I heard a little voice inside of me telling me I would be okay. It was the faintest of voices, yet it spoke to me all three times. With each occurrence, I figured why not wait and see if I would be okay; what’s the worst that could happen if I just delayed the inevitable? I am so glad I listened.

What I’ve seen first hand and the reason I am writing this is to encourage parents to LISTEN to their children. Our kids are NOT extensions of us. They were not brought into this world to finish what we started, to take over the family business, to be the star quarterback, to be the top model or to make us proud. They were brought into this world to become who they are. When we don’t like the direction they are going, and we try to influence or insist they change their course, we are killing their spirit. We are not allowing them to become who they are meant to be. We deflate them!

Because of my horrible childhood, I was never going to have a child. I knew I was not capable of being a good parent because I didn’t have a good parent. I knew I would not be a good role model and we would suffer and most likely starve.

They were brought into this world to become who they are

Much later in life, I reached a place where I knew I could do it. I let go of my painful childhood and was living in the present without hatred or anger about what I didn’t have as a child. I was 38 years old, and I was ready to have a baby. At that age, I figured I would let the universe decide if I should be a parent. A week of “trying” paid off. I was pregnant.

My daughter is 18 and getting ready to go off to college in August. I am proud of the relationship we have created over the years because we talk about everything. I know all of her hopes, her dreams, her fears and her demons. She knows whatever she decides to do over her lifetime; I fully support her choices.

At first, I was a little worried about her because she hasn’t had any adversity in her life. She has grown up in the same house with the same two parents. She has gone to the same schools and followed the same friends. I thought her life was too vanilla! I wondered how she would deal with difficulties and tragedy when it arose because she’s never had to deal with any of that. Well, I was wrong.

My daughter had been struggling for quite some time, but finally, she opened up to me about the only thing I didn’t know. She came out to me about a year ago. It was truly one of the sweetest, yet saddest moments I had ever had with my baby girl.

I hated the fact that she was hurting for almost two years, afraid of telling me. Me! Of all people! Once she finally got it off of her chest, she was a butterfly free to flit about completely happy and unhindered. Being attracted to girls rather than boys doesn’t change anything about my daughter. She is still the beautiful soul she has always been. She has big hopes and dreams for her future and a vision of what she wants to do with her life. Who she is attracted to has nothing to do with who she is.

I saw a video a few years ago where a man was interviewing people asking the question, “when did you choose to be heterosexual?” Oh the answers were quick and to the point every time! “I was born this way” most of them said proudly. Well there you go. Whether you are attracted to the same sex or the opposite sex, it is not a choice we make. It is all part of who we are. It’s all good.

The only thing I worry about for my daughter are those high and mighty people who believe their way of thinking is the right way; they want to insert their judgement upon her and her sexuality. Well let me tell you people, my daughter did not choose this. No one would ever decide to be gay. Why would someone choose an option fraught with difficulties and haters? They wouldn’t. Whether gay or straight, she gets to live a beautiful life just like anyone else. I still can’t imagine why anyone has a problem with this. Who we love is nobody’s business but our own. I am responsible for me, you are responsible for you. No one has the right to tell anyone what is right or wrong with their choices.

As a world, we have collectively decided how we want everything to look, be and feel. If you do what we collectively decided on, you are good. If you go against what we’ve decided on, you are bad. Who gets to make and carry out these decisions? Why do we let anyone decide for us what is right and wrong? There is no right or wrong. There just is what it is.

So many young men and women have finally found the nerve to “come out” to their families only to realize that one or both of their parents cannot accept their new reality. It is heartbreaking because I know some of these kids. What do you think this does to a child? They didn’t choose this! Coming out to their parents was the hardest thing they ever had to do. Now, they are minimized; reduced to not mattering. Where does this leave the kid? How do you think they feel when they are told, “it is only a phase?”

Our children come into this world with a plan. It is our job to love them, keep them safe and not provide undue influence about who or what we want them to become. They have their plan. They will follow the correct path intended for them. Just love them, accept them for who they are and the choices they make. Most of the time it will not be what you wished for them but for god’s sake, let them figure it out. Their little lives are not about you! If you want to live vicariously through your kids, do NOT have children! Get out and change the way you live your life right now and do not put the burden of pleasing you on your kids.

It is our job to love them, keep them safe and not provide undue influence about who or what we want them to become.

It is hard enough being a kid and a young adult. Think about your relationship with your parents. How easy was it for you to tell them what path you wanted to go down knowing it was entirely the opposite direction from what your parents wanted for you? I can imagine the kids that end up suicidal have tried to be who they are, but they are told “no… that is not who you are.” How is a kid supposed to process this?

They know who they are and what they want to do, but the people who have raised them are telling them otherwise. It is too much for them to take. I would imagine this is the ultimate breaking point for many kids.

Think deeply about your relationship with your children. Are you allowing them to unfold into the human they are supposed to become? Are you influencing them in any way? Are you pressuring them about what school they should go to or what career they should consider? Is there pressure to take over the family business or to run the farm? Just because they may be gifted at playing a sport or an instrument does not mean that is what they need to do.

Love them, but let them go and become who they are meant to be

Watch, love and enjoy who they are and what they do, but shut your mouth. Don’t let your needs or your beliefs overshadow the path they are intended to walk down in their life. Give them the reins to their existence. Love them, but let them go and become who they are meant to be. Don’t clutter their head with your narrative about what you would like to see them do. Encourage them to take the time to go inside and discover who they are. Then, set them free.

Having children means taking care of them while they are in the nest. When they are able to take care of themselves, they need to get out of the nest and spread their wings. They need to learn how to struggle, suffer and fail because it is with those difficult times that they will learn how to be an adult and make the right decisions. Help them become the best human they can be but let them decide who that person is. Not a shadow of you or what you want them to be. Ever.