The Shifting Sands – How the Loss of One Changes Everything 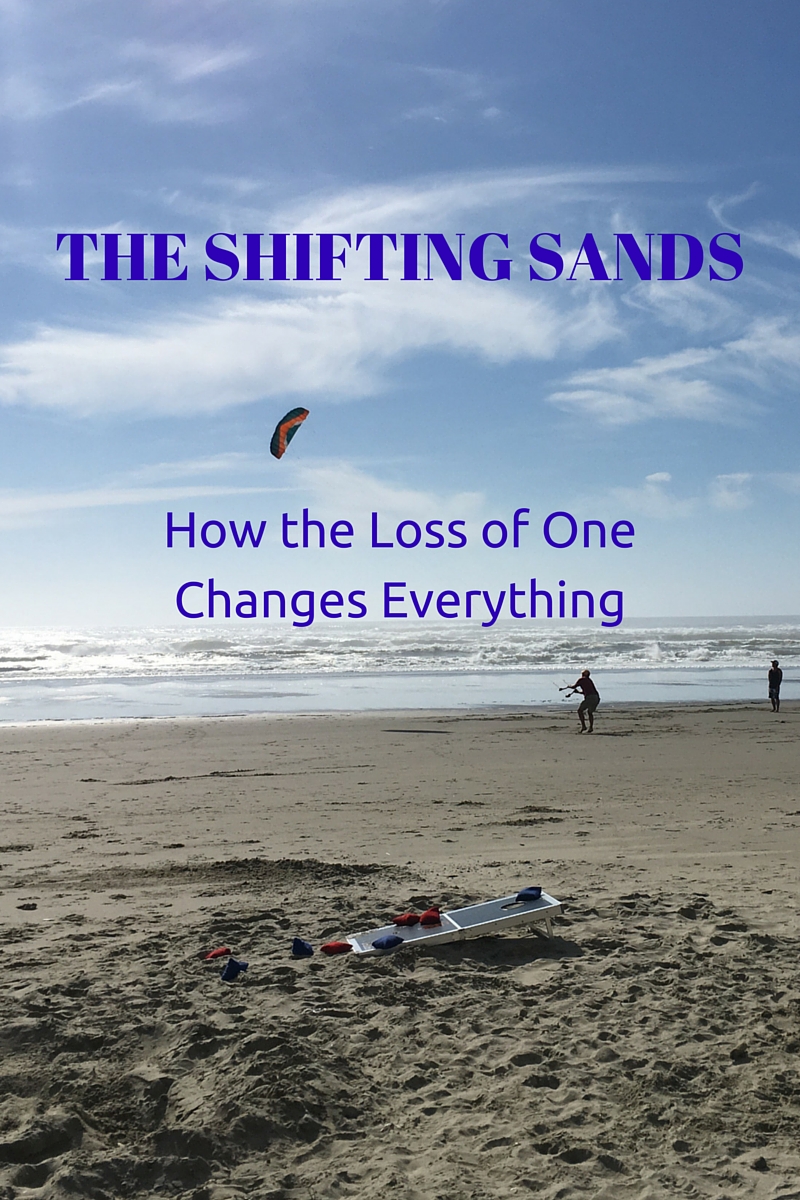 On the sandy Oregon Coast last week, we talked about how every time we visit the beach in Yachats, it looks different. One year the sand will be so high, you can step down merely a few steps from the grass to the beach. The next year it can be at least a six-foot drop-off. Sometimes the water comes way up to the stairs, other times, it stays out hundreds of feet.

This year, on the first day, one of the rivers that flow into the ocean ran parallel with the sea, rather than directly to it as it always does. This time, there were mounds of sand creating a new channel for the water to flow. Every morning was a different look and a different vibe. 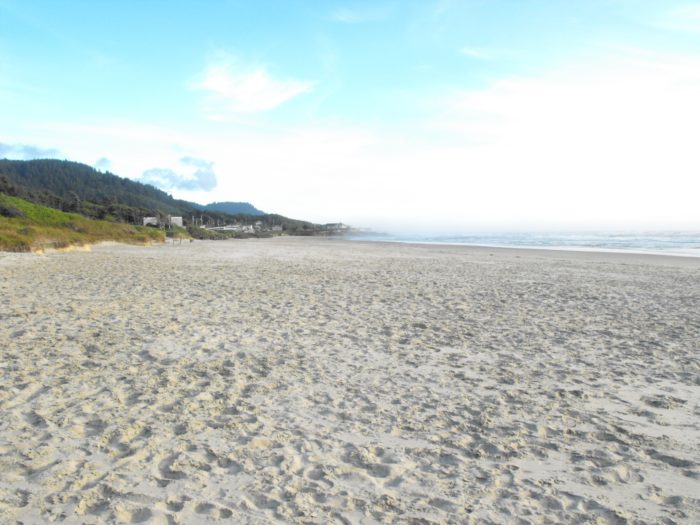 On the warm, wind protected cove where we set up our camp for the day, there were many boulders against the hard wall made by decades of sand buildup. When you pick up one of the boulders, all of the sand surrounding it will fall and quickly fill in the hole. When you dig in the sand, you do make progress as your hole gets deeper, but one thing for sure, the sand you remove will be mostly replaced by the sand on the side.

The thought of this shifting sand has been on my mind for the last couple of weeks.

As the entire family met at the Oregon Coast as we do every 4th of July weekend, this time, we all knew we would be seeing Bruce for the last time.

Bruce is my father in law. He has lost his very long battle with cancer. Right now my mother in law and my husband are with him, helping him through the process of passing away.

When you lose a prominent family member, the sands are guaranteed to shift.

During all of the turmoil in my childhood, the constant in my life was my grandma and grandpa, my mom’s parents. Grandma was always kept busy because her job was to rescue my mother. My mother made plenty of terrible mistakes; she always either called her mom to step in and help or moved us into their house. Again. Grandma was a great woman and a great grandmother to have. Grandpa, however, grandpa was a rock.

When you lose a prominent family member, the sands are guaranteed to shift.

In looking at my grandparent’s relationship, I only remember seeing them have one memorable fight. The marriage seemed to be working perfectly. Because of this, I couldn’t ever figure out how my mom left the nest in such a mess. How does one make so many horrible choices when they came from what seemed to be a “normal” family? Not sure if I will never figure this out.

As the years would go by, grandpa’s health started to deteriorate. He had a few heart attacks and at least one stroke that I can remember. He had major surgeries, one I recall was a quadruple bypass.

I’m not sure which surgery it was, pretty sure the bypass, but there was the time when he “died on the operating table.” I remember our conversation after the surgery when he told me it was absolutely beautiful. They said they thought he “was gone” for a few minutes, but in those few minutes, he knew it was a place he wouldn’t fear when it was time to return.

As more time would go by, he had to wear a monitor to alert the hospital if his heart was not functioning properly because they lived on the outskirts of the city, far away from medical help. He was getting to the point where he was seriously starting to struggle.

He was in the hospital after yet another episode. I was living in Ohio at the time. When I got the call that he was admitted, I flew out to see him.

During this visit, we had a great conversation. I know grandpa saw something in me that he didn’t see in the rest of the family. I was a safe place to be completely open and honest. What was said in the room, stayed in the room.

He told me he was tired. He was so tired and constantly in so much pain; he didn’t know how much longer he could stay around. He told me he realized he had failed grandma. He treated her like a princess and did everything for her throughout their marriage. She never learned how to pay a bill or even put gas in the car. There were so many little things he did on a daily basis; he knew he couldn’t leave and expect her to know how to take care of herself. (Explains why my mom always needed help and couldn’t do anything on her own.)

It was during this conversation that he told me he had no choice but to get better and get his butt home from the hospital, at least one more time. Once he was back on his feet, he knew he had a job to do. He was going to put grandma through “household 101!” He was going to make sure every little thing he did moving forward, he was going to teach her how to do it. She never even questioned what he was up to; she learned how to take care of all of the little details he had been managing for decades. Grandma was now putting gas in her own car!

It was six to nine months since his last visit to the hospital when I got the call that he was back in once again. I immediately booked a flight and flew home to see him. I wanted to see him, and I knew he needed to see me.

Grandpa had another heart attack. The entire family was there. Everyone was stirring around in the waiting room; one or two at a time would go in to visit with him. When it was finally my turn, I made sure it was just grandpa and me. Neither one of us wanted other ears in the room.

He was proud of himself; he taught grandma how to survive on her own. She learned everything she needed to know. Beyond this, he felt good knowing she had her daughter, three sons and grandkids there to help her if she ever needed it. Little did he know the tide was going to shift.

He told me that everyone in the waiting room had been in to see him, and they were all telling him how much they needed him to get better. More than the rest, my mom and grandma were begging him to hold on. He said to me that he was tired, and he was done fighting. He was ready to let go. He hung in there and did what he knew he had to do. Grandma could take care of herself. His work here was done. He was tired of being tired and tired of being in constant pain.

As I sat with him and held his hands, I gave my grandfather permission to let go. Those were the words he desperately wanted and needed to hear that day. As much as I loved that man with my whole heart, he just needed one person to understand – and he knew I was the one.

The thing is, telling him it was okay to let go wasn’t about me. It was about him and what he so desperately wanted and needed to hear.

My grandpa died that night.

I gave my grandfather permission to let go

After the passing of my grandpa, I realized when a huge boulder is removed from the sand, the sand surrounding it will shift. The sand will pile on top of itself filling in the hole, and some of it will blow far away. My grandpa was the boulder. My family was the sand. He was the glue that held our family together.

Almost immediately after he passed, our family completely fell apart. I had three uncles, aunts, and many cousins. We had been in each others lives as far back as I could remember. The family imploded on itself and never again would be as it once was. I heard stories about immediate fighting and backstabbing. There was the “he said; she said” stories circulating as well as everyone fighting over the minuscule estate – even though grandma wasn’t going anywhere anytime soon! They lived in a trailer!

The passing of one man changed the lives of so many. The sand has most certainly shifted. 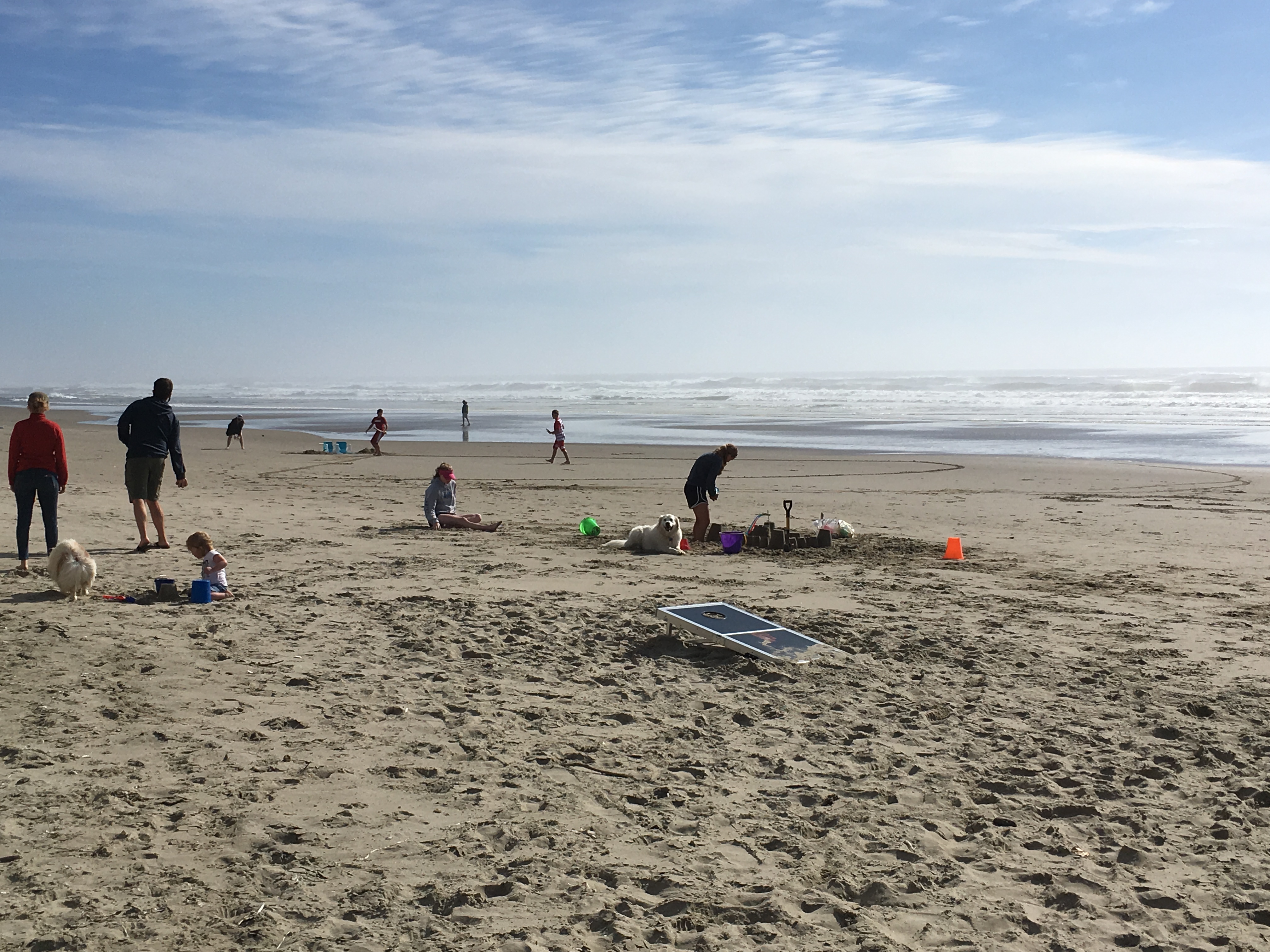 As my father in law is in the process of leaving his existence on Earth, I can’t help but wonder what will happen to our little family after he is gone. We have so few people as it is and all of us are scattered hundreds of miles apart. I can only hope that maybe, this can be the time that will pull everyone a little closer together.

Sand is always shifting. Very soon, another well polished boulder that has seen many tides and many oceans will be leaving our shore. When this day comes, I hope that the sand which surrounded it will find a way to land in the hole from whence it came, together, united and stronger than before.

When you have a small family, you need to hope the pieces can all stay together. It’s what I hope for my daughter.