Leaving Radio, but I am Still Talking 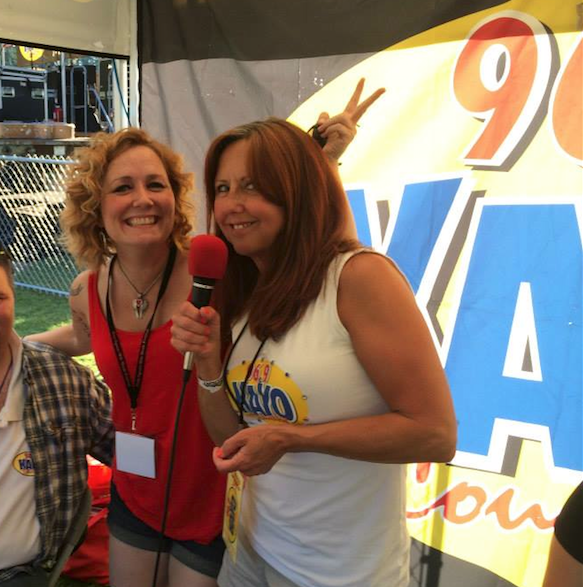 When my gut talks to me, I know to listen. That inner voice has been guiding me in and out, down and up, around and over my entire life. It’s never steered me wrong. When I do listen, and I move in the direction I am supposed to move; I know I’m going the right way. A zen-like calm comes over me and happiness abounds. Every time.

I’ve worked on the air in radio for many years. My first “big” gig was working part-time on-air at KMPS in Seattle. Seattle has always been a major market for radio; it was crazy for me to be able to start there. As the morning show host, Ichabod Caine would always say, “I paid my due!” (Not dues – I took a short path to get there.)

I was working at KMPS when I got married and when I had a baby. I was fortunate to have such a job where when I would work, John would be home with the baby and vise versa. We were able to raise our daughter without putting her in daycare.

I worked at KMPS over 11 years when I was offered the first full-time radio shift I could take and be a mom at the same time. It killed me to leave such a huge station, but my gut told me it was time. I accepted a mid-day job in Olympia at Mixx 96.1, leaving the station behind that was solid in the community for over 30 years!

Three months after starting my new job, KMPS would implode. Everyone I worked with over the 11 years was fired; including the program director that won the station a CMA Award! It was nuts. My gut knew it was time.

Being on the air mid-days was perfect for being a mom. I would drop Hannah at the bus stop in the morning, and I would be there when the bus pulled up. It worked out perfectly. During the summer, she would often come to work with me, or I would make sure she was at a friend’s house. Two years after I started working at MIXX 96.1, I was called into the program directors office. It was the last thing he wanted to do, but he had to lay me off. There weren’t enough advertisers on the air to support the staff, and I was the new guy, so it had to be me. He was a little surprised when I smiled and said, “okay.” I was totally okay with it. I had found myself to be quite bored just hanging around the studio day in and day out waiting until it was time for me to talk. My life felt like it was being wasted away killing time between each song; being laid off was a miracle.

While I was filling in at MIXX as a part-timer, I was contacted by Kevin from 96.9 KAYO. I met him at the station, he gave me a tour and within days I was working there. I started doing the mid-day shift and remotes. Soon I took on hiring and managing the street team of KAYO girls. Last year, I took on the job of Promotions Director. It was busy, but I was having a blast. Working alongside Kevin and Brian made going to work every day more like a playdate than anything else.

Brian was laid off last year and January 5th of this year, Kevin was let go from the radio station. It was at that moment that I remembered being on the radio is not what I am meant to be doing! It was the vehicle to get me to where I need to go but talking about songs and country artists is not where I am to be. At that time, there were a few gut-check moments that came my way and finally, I have listened!

I had one last thing I needed to free myself from, but this one would be the hardest. Recently I dropped my daughter off at the bowling alley to hang with her boyfriend and his family. When I walked in with her, they all came running up to meet and talk to me. They shook my hand and asked me a whole bunch of questions about the station. KAYO is their favorite station. I felt immediately guilty at the thought of leaving them! They became a representative of all of the people who have listened to me over the years that knew all about my life. I have had so many people come up to me still referring to me as C.J. from KMPS. They have become my extended family. The thought of leaving them put a huge hole in my heart.

On Monday of this week, I told the station I need to take a complete sabbatical from working in radio. It was such a difficult choice to make but one that had been wearing heavily on me for a very long time. My gut had been aiming me in that direction; I finally pulled the trigger.

Since I said this out loud and it is all happening, I feel free. I knew it had to be done. It was incredibly hard to part with the people who counted on me, day after day, but it was time for me to count on myself. I am not out of their lives; I am merely changing the way I speak to them… for now.

I may be leaving radio, but I am still talking.